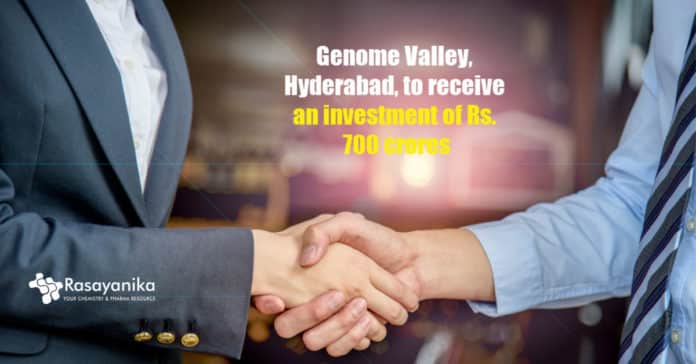 Genome Valley, Hyderabad, to receive an investment of Rs. 700 crores, from pharma companies.

Genome Valley in Hyderabad will receive an investment from pharmaceutical companies Granules India and Laurus Labs. The investment plan was announced on Tuesday after representatives of the two companies interacted with Minister KT Rama Rao the same day.

Rama Rao, Industries Minister, expressed gratitude for choosing Telangana for their investment and thanks the leadership of Granules India and Laurus Labs for the opportunity. He added that the state government would support them in possible ways.

Granules India, a pharmaceutical company, Hyderabad, plans on investing a major investment of Rs 400 crore for setting up a facility for the manufacture of 10 billion units of finished dosages. This unit is expected to generate 1,600 employment opportunities.

There are eight manufacturing site locations of the company and present in 75 countries across the globe. The largest Commercial Pharmaceutical Formulation Intermediates (PFI) Facility in the world is run by the company at Gagillapur near Hyderabad.

A leading pharmaceutical company, Laurus Labs, has announced a formulation facility set up with a unit capacity of 5 billion. The company is planning to invest Rs 150 crores two times, making it a total investment of Rs 300 crores. 150 people are expected to be employed in phase I of the plant.

The announcement was made on Tuesday after Satyanarayana Chava, CEO, Laurus Labs, met Rama Rao, Industries Minister. Jayesh Ranjan, Principal Secretary, Industries Department, was in the meeting along with the team from Laurus Labs.

The R&D facility of Laurus Labs is located in IKP Knowledge Park, Hyderabad, with six manufacturing facilities that operate in Visakhapatnam, Andhra Pradesh. These facilities are approved and also certified by WHO, USFDA, NIP Hungary, and other renowned agencies.

Among the leading manufactures of API, Laurus Labs stands out for Oncology, Anti-Retroviral (ARV), Anti-Diabetics, Cardio-vascular, Anti-Asthma, and Gastroenterology.

The minister praised Chief Minister K Chandrasekhar Rao and remarked that proactive policies under the state is the reason for the attraction of global leaders in IT, Textile, Pharma, Aerospace, and Defence and different other sectors to different parts of Telangana, including in Hyderabad. He assured that the present investment would generate employment opportunities for the youth in Telangana.

Genome Valley, Hyderabad, to receive an investment of Rs. 700 crores, from pharma companies.