There’s new hope for combatting the sags, bags, and wrinkles brought on by time. Today, researchers report that they’ve created a cream that—when rubbed on the skin—forms a transparent, flexible polymer film that restores aging skin’s youthful and elastic properties. Each application of the so-called “second skin” lasts for a day or more, and it can dramatically reduce bags under the eyes and help dry skin retain moisture, at least temporarily. Down the road, it could also help treat a wide variety of skin conditions, such as eczema and psoriasis, bringing relief to millions.

“This has huge potential,” says Suzanne Kilmer, a dermatologist at the University of California, Davis. Kilmer notes that people with eczema and other skin conditions often wrap their skin with bulky bandages or even clear plastic wrap to ensure that their medication doesn’t wipe off. “Instead of patients having to wear all that stuff, they could use this invisible film,” she says.

Our skin is subject to a wide variety of insults, from the sun’s ultraviolet rays to cuts, scratches, diseases, and—of course—the assaults of time. Youthful skin is typically highly elastic, allowing it to snap back into place if pinched or flexed. That’s partly because of

a web of protein filaments in the skin that act like rubber bands to pull it into its normal shape. However, these filaments break down over time, and they aren’t replaced as quickly in elderly skin as in youthful skin, says Barbara Gilchrest, a dermatologist with Massachusetts General Hospital (MGH) in Boston, who was part of the new study. The result is the sagging skin and wrinkles of old age.

For people dealing with eczema and psoriasis, rashes and dry skin can be so severe that they can’t sleep at night, says R. Rox Anderson, an MGH dermatologist who also worked on the current study. According to Anderson about 20% of children and 10% of adults in the United States suffer from eczema.

To treat these and other skin conditions, Anderson and Gilchrest have long teamed up with Robert Langer, a materials scientist at the Massachusetts Institute of Technology in Cambridge. Their goal was to create a product that would restore skin’s youthful elasticity, yet be transparent and flexible. They created their first “second skin” of a silicon-polymer gel activated by a second gel, and marketed it as a way to temporarily reduce under-eye bags. But the combo, sold by a firm called Living Proof, was criticized for being too costly ($500 for a 7-week supply) and for peeling off after only 5 hours.

So Langer and his team went back to the lab. They kept the same goal, and they stuck with similar starting materials: silicon-based polymers called siloxanes, regularly used in cosmetics and widely regarded as safe. But Langer and his colleagues changed numerous components. They varied everything from the length of individual molecular chains to the makeup of chemical groups called crosslinkers that bind separate chains to one another as the gel transforms into a thin polymer film. Langer says he and his colleagues tested hundreds of different formulations. In the end, they came up with a platform that allow them to systematically change the film’s thickness, breathability, flexibility, and durability, in an effort to target different cosmetic and medical uses.

As with the previous film-forming material, users apply the new film in two steps. First, the siloxane gel is rubbed on the skin. Then, a second gel, which contains a platinum catalyst, is rubbed on top, causing the crosslinking groups to bind to one another and form a continuous film.

As the film dries, it shrinks by as much as 10%, depending upon the exact formulation. Anderson, Gilchrest, and colleagues tested their cosmetic formulation on 12 volunteers. After they applied the two gel layers on the skin under subjects’ eyes, the films shrank, pulling the skin taut. As they report today in Nature Materials, the films reduced the presence of eye bags up to 40% for 24 hours, compared with control tests with only the first gel. They devised a 1-to-5 scale that measured how prominent the eye bags were, and found in volunteers that the film reduced it by 2 points on the scale. Tests also showed that after 24 hours the film reduced skin water loss by 23% by acting as a barrier to protect dry skin. By comparison, petroleum jelly and a commercial moisturizer also reduced water loss, but only for a couple hours. Even though it has not yet been tested for eczema, psoriasis, and other debilitating skin conditions, Gilchrest says she is hopeful that it might one day offer relief to patients with such conditions. Simply giving damaged skin another protective layer could help those patients, Gilchrest says. But future versions could also come loaded with medicines designed to be slowly released over time, she says. Anderson and Langer are already getting started: They have launched a new company, Olivo Labs, to pursue those medical uses. 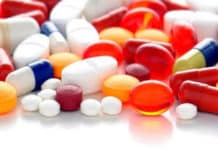