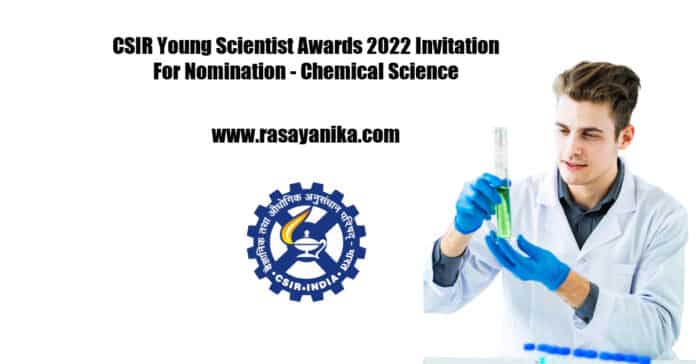 The Council of Scientific & Industrial Research (CSIR) invites nominations for CSIR
Young Scientist (YS) Awards for the year 2022. The awards are to be given for research
contributions made primarily in India. The nominee should be a regular Scientist (as
per CSRAP Rules) of CSIR system and should have joined the CSIR laboratory on or
prior to 26th September 2021. The age of the nominee should not be more than 35 years
as on 26th September 2021.

The YS Awards are given annually in the following disciplines:

Award: The YS Award comprises a citation, a cash award of Rs 50,000 (Rupees fifty thousand only), and a plaque.

The Council of Scientific & Industrial Research (CSIR) introduced, in 1987, a scheme of Awards for Young Scientists in CSIR system in order to promote excellence in various fields of science and technology. These Awards are known as “CSIR Young Scientist Awards”.

Promoting excellence and recognizing outstanding contributions made by the young CSIR scientists for their work done primarily in India during the last five years preceding the year of the Award.

Directors/ Chairperson of Research Councils / Bhatnagar Awardees can propose nominations only of scientists belonging to the CSIR laboratories/ institutes with which they are associated. Each of them can send normally a maximum of two nominations in each discipline.

Duly approved Advisory Committees (comprising of atleast one Bhatnagar Awardee in each committee) will be constituted in the above-mentioned five fields for making selections for the “CSIR Young Scientist Awards”.

Nominations addressed to Scientist Incharge – SSB YSA Unit, CSIR HRDG New Delhi must be submitted in the prescribed format via e-mail to ssb@csirhrdg.res.in on or before 31st January 2022. No hard copy to follow. Please visit www.csirhrdg.res.in for
further details and nomination format.

The CSIR Young Scientist Awards will be presented to the recipients on 26 September, the CSIR Foundation Day every year at a formal function arranged by CSIR. At this ceremony, citations highlighting the work of the recipients are read out. 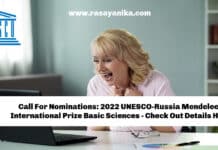 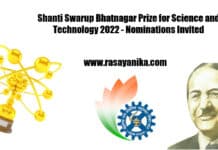 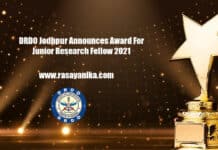 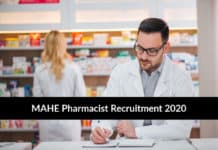 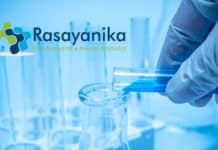 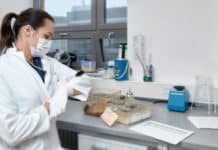