Researchers are working on mimicking cellular systems to develop molecular motors that can move or even deliver drugs to target tissues. Engineering such motors may ultimately lead to molecular robots that can execute more complex tasks. To this end, researchers must find ways to convert motion at the molecular level to motion at the macroscopic level. They also must find ways to cause chemical reactions to repeat autonomously and continuously.

Yoshiyuki Kageyama, Sadamu Takeda and colleagues at Hokkaido University’s Department of Chemistry have successfully created a chemical compound, or a crystalline assembly, which autonomously repeated flipping under blue light.

The team made crystals composed of an organic compound, called azobenzene, commonly used in dye manufacturing, and oleic acid, commonly found in cooking oil. Azobenzene molecules take two structurally different forms: cis and trans. They repetitively convert from one form to the other under blue right. The scientists tested if this would influence the structure of the azobenzene-oleic acid crystal, which contained unequal amounts of cis- and trans-azobenzene.

By applying blue light to the crystals in solution, the team observed

, under a microscope, an oscillatory bending-unbending motion of the thin crystals, suggesting the existence of two stable structures, bent or unbent, depending on the cis/trans ratio. The frequency of the motion increased when the light intensity was increased. Some crystal complexes even exhibited ‘swimming-like’ motions in the water. Previously reported light-responsive materials have been limited in their ability to deform. The properties of the compounds in the Hokkaido University-developed crystals, however, allowed for a two-step switching mechanism, resulting in regular repetitive oscillations.

“The ability to self-organize rhythmic motions, such as the repetitive flipping motion we observed, is one of the fundamental characteristics of living organisms,” says Kageyama. “This mechanism can be used in the future to develop bio-inspired molecular motors and robots that will find applications in wide areas, including medicine.” 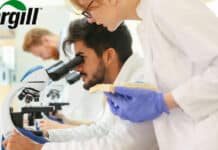 Walk-in for the post of Senior Research Fellow for MHRD-GOI funded...