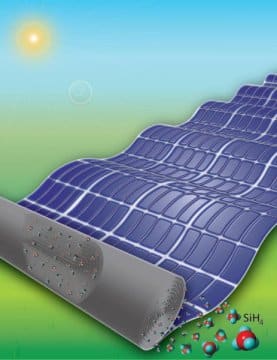 A new, high-pressure technique may allow the production of huge sheets of thin-film silicon semiconductors at low temperatures in simple reactors at a fraction of the size and cost of current technology. A paper describing the research by scientists at Penn State University publishes, in the journal Advanced Materials.

“We have developed a new, high-pressure, plasma-free approach to creating large-area, thin-film semiconductors,” said John Badding, professor of chemistry, physics, and materials science and engineering at Penn State and the leader of the research team. “By putting the process under high pressure, our new technique could make it less expensive and easier to create the large, flexible semiconductors that are used in flat-panel monitors and solar cells and are the second most commercially important semiconductors.”

Thin-film silicon semiconductors typically are made by the process of chemical vapor deposition, in which silane — a gas composed of silicon and hydrogen — undergoes a chemical reaction to deposit the silicon and hydrogen atoms in a thin layer to coat a surface. To create a functioning semiconductor, the chemical reaction that deposits the silicon onto the surface must happen at a low enough temperature so that the hydrogen atoms are incorporated into the coating

rather than being driven off like steam from boiling water. With current technology, this low temperature is achieved by creating plasma — a state of matter similar to a gas made up of ions and free electrons — in a large volume of gas at low pressure. Massive and expensive reactors so large that they are difficult to ship by air are needed to generate the plasma and to accommodate the large volume of gas required.

“With our new high-pressure chemistry technique, we can create low-temperature reactions in much smaller spaces and with a much smaller volume of gas,” said Badding. “The reduced space necessary allows us, for the first time, to create semiconductors on multiple, stacked surfaces simultaneously, rather than on just a single surface. To maximize the surface area, rolled-up flexible surfaces can be used in a very simple and far more compact reactor. The area of the resulting rolled-up semiconducting material could, upon further development, approach or even exceed a square kilometer.” 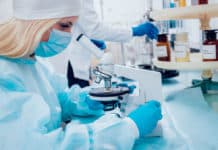 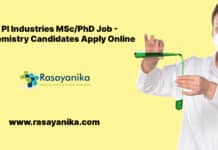 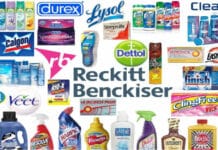