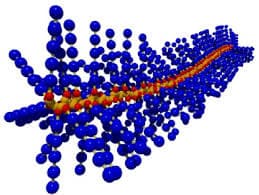 Animal muscle needs to be strong enough to endure strain; it must also be flexible and elastic; and it is self-healing. Finding a polymer that has all of these properties has proved challenging. However, researchers from Stanford, Nanjing University, UC Riverside, Harvard, and the University of Colorado have reported the synthesis of an elastomer that mimics the properties of animal muscle. Their polymer, is also stable at room temperature and not sensitive to water. Their work appears in Nature Chemistry.

Efforts to create polymers that mimic the properties of biological muscle have come short of being practically useful. Often the bonding involved in making these polymers must be sufficiently strong to serve as actuators, but weak enough for reversible self-healing. Many models, to date, involve hydrogen bonding, but hydrogen bonds are sensitive to water. Li, et al. have, instead, exploited metal-ligand interactions as a way to mimic muscle properties.

The ligand 2,6-pyridinedicarboxamide (pdca)binds to Fe(III) via the pyridyl nitrogen and the nitrogen and oxygen on the carboxamides. Two pdca molecules coordinate to one Fe(III) atom through six coordination sites. Two of the sites are strong bonds (the pyridyl), two sites are “medium” strength bonds (the amides), and two are weak

bonds (the carboxyl). Calculations of bond strength show that the strong bonds are similar to covalent bonds, while the weak Fe-O bonds are similar to hydrogen bonding. This multi-bonding structure, as it turns out, provides an excellent framework for making an elastomer.

The ligand was then tethered to a poly(dimethylsiloxane), or PDMS, polymer backbone. Two of these polymer strands were held together through a coordinated Fe(III) atom. Force calculations of the PDMS-tethered, crosslinked polymer confirmed that by having bonds of multiple strengths next to each other, the weaker bonds can readily break and re-form, which is conducive for stretching and self-healing. But the Fe(III) can remain near the ligand through the stronger coordination sites, allowing for rapid re-formation after unfolding.

The Fe-Hpdca-PDMS polymer showed remarkable mechanical strength, stretchability, and recovery. When the polymer was stretched, then allowed to rest for an hour, and then stretched again, it showed almost full recovery of its original shape. It also showed recovery after a cyclic stress test. When the polymer was subjected to stretching for an hour, it took a little longer to recover and did not quite return to its original state. Notably, the authors report that their polymer can withstand a much higher strain before breaking than typical crosslinked PDMS polymers or reported elastomers.

The polymer’s self-healing properties were tested by first cutting it into two pieces and then allowing it to re-from. The authors found that the cut on the polymer film was not discernable after being allowed to “heal” at room temperature for forty-eight hours. The polymer spontaneously healed at low temperatures, -20oC, without the addition of additives that would promote polymerization, something that is unprecedented for an autonomous, self-healing polymer.

Finally, the Fe-Hpdca-PDMS polymer showed excellent potential as a model system for artificial muscles. Li, et al. punctured the polymer with a sharp object and marked the area of damage. They then let the polymer self-heal for seventy-two hours. After this time, they applied a square-wave high-voltage signal through electrodes with a high enough potential that the polymer began to deform. However, despite the damage, the polymer did not show a dielectric breakdown, even at the location where it was punctured.

This polymer has many properties that make it a compelling model system for an artificial muscle. It displays high stretchability and flexibility. It self-heals and has a high dielectric strength. The polymer can be tuned by changing the ligand-to-metal molar ratio as well as adding functional groups to the ligand, two things that the authors report could be explored in future studies. 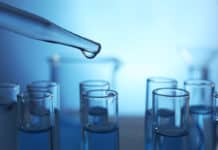 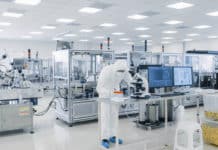 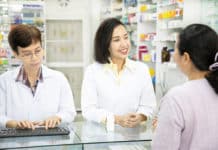