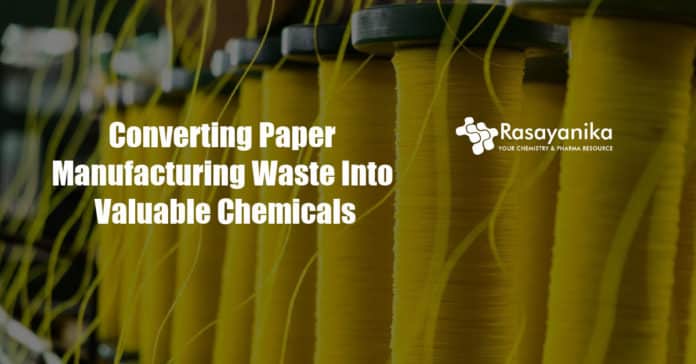 A researcher team from Ames Laboratory, U.S. Department of Energy, has discovered a way to generate valuable chemical precursors involved in nylon making from a common byproduct of the process of paper manufacturing. In terms of the energy input and the solvents used, this process is environmentally friendly compared to other methods and provides an alternative to the burning of pulping waste products.

Annually, the paper industry generates Kraft (from the German meaning strength) lignin, a major waste product, that amounts to about 50 million tons. The waste lignin can be burnt for heat, but the burning generates greenhouse gases, i.e. releases carbon dioxide in the atmosphere.

Researchers at Ames Laboratory discovered that treating the waste lignin at a reasonable temperature (200 °C) with aqueous sodium hydroxide produces guaiacol. With the help of suitable catalysts, under even milder conditions, the Guaiacol can then be converted to nylon precursors-with this new, two-step viable process that produces a useful chemical from the waste lignin.

Lead investigator, Igor Slowing, Ames Laboratory, says that the team discovered that under ambient nitrogen pressure environment kraft lignin could be depolymerized in dilute alkaline solution at relatively low temperature (200 °C). In a total monomer amount of 13% based on the lignin input, the team was able to produce guaiacol with high selectivity (>80%).

To determine that guaiacol was generated through cleavage of β-O-4 bonds, the team used different techniques in the study like solid-state NMR experiments, model reaction, and mass spectrometry in the original lignin structure. Severe reaction conditions are required for the cleavage of β-O-4 bonds and often lead to undesirable side reactions.

The guaiacol derived from the waste lignin was then converted to Ketone Alcohol or KA oil,  a precursor of the nylon, under 1 bar H2 with a Ru/C as a catalyst. Using low H2 pressure in order to ensure full selectivity to KA oil, without the formation of undesirable byproducts, proved critical in the two-step process. The Ru/C catalyst was deactivated in the direct treatment of lignin.

Igor Slowing stated that in the production of value-added chemicals with high-demand, the two-step process gives a new option for the utilization of lignin.

The study is published in the journal Green Chemistry.

Two-step procedure of Kraft-lignin conversion to nylon precursors in an ambient environment.